A Journey into Building Your Own Electronic Hardware – Part II

We continue with Part II of the series "A Journey into Building Your Own Electronic Hardware." After we reviewed the first four steps in Part I here, we are now ready to build the first physical prototype of our new hardware!

Time estimation: 3 to 8 weeks (including international shipping if needed)

Just like you can use a 3D printer to quickly prototype the mechanical enclosure you want, there are many off-the-shelf prototyping solutions in the electronics world that you can throw together to build a prototype. If you need small and low power microcontrollers to read sensors and control various devices, there are endless options of modules and development boards from Hexabitz, Arduino, Sparkfun, Adafruit, Espressif and many others. If you need more computing power to build mini embedded webservers or run machine learning and image processing algorithms there are many single-board computers from Raspberry Pi, Beagle Bone, Nvidia, Intel etc. Also, if you are working with advanced microprocessors or analog and digital chips, virtually all manufacturers and OEMs have their own development and evaluation solutions to get you started.

This is not the kind of prototyping we want to talk about here though. Hooking up different development boards and off-the-shelf solutions together should be done in Step 1: Research and Concept Development. Once you test your concept with off the shelf solutions, you should move on to custom-made solutions for the following reasons:

Prototyping high quality PCBs is usually a lengthy and costly process as special molds, called Stencils, need to be laser-cut for various PCB layers. Manufacturers usually combine multiple orders together in a single batch to reduce the cost of operating their production lines. Usually fabricating the PCB itself can take between 24 hours to 6 weeks for HDI and rare/complex PCB stacks. The biggest question here is whether you build your PCB inshore or offshore. There's no denying the fact that building a PCB in China or India is much cheaper than building it in Europe or the US at the same exact quality. It's a decision of time vs. money. You can build same PCB in the US for $4000 and receive it in 3 days while it costs you in China less than $1000 (with shipping included) but it'll arrive in 3 weeks. For larger corporations, $3000 is a steal for saving two weeks. However, to most startups saving $3000 is a big deal. You are not going to beat your competition and save the world in these two weeks. And unless you're a startup swimming in VC money, saving $3000 is important for your runway and survival. I'm not advocating here for offshore vs. inshore. There are always optimal options for each scenario. However, the main point here is that early-stage startups need to optimize cost vs. time. Saving a few weeks shouldn't break the bank. We will discuss more about prototyping in a future article including sourcing components for your prototypes and the magical relationship between quantity and cost.

Time estimation: 2 to 8+ weeks (can run partially in parallel with other tasks)

It's hard to imagine an Embedded Electronics System these days that does not use a form of computing. It can be small, low power Microcontrollers, or large power-hungry Microprocessors, or ultra-fast FPGAs or complex System-on-Chips (SoCs) combining all these technologies and many more. All of these embedded computing technologies require some sort of programming and this is called firmware. Firmware development is becoming increasingly the most important and most complex part of developing cutting-edge electronic hardware mainly because:

It is typical that firmware development takes more time than hardware. Starting with a few weeks but might reach a year or more when dealing with complex Microprocessors. It's common as well to assign multiple firmware engineers on the same project splitting design work in parallel to accelerate development time. Some people specialize in developing firmware for a specific type of computing platforms (MCUs, FPGAs, Linux MPUs, etc.) However, hardware platforms aside, firmware development can be divided into four main categories in genral:

We will delve more into the mysterious firmware development world in a future article.

Time estimation: 2 to 8+ weeks (can run partially in parallel with other tasks)

Software development entails developing programs that run on computers (PC, Mac, Linux, etc.) as well as servers (your own or in the Cloud). It also expands to other devices such as smartphones and single-board computers. Although you are building your own hardware device, these days your hardware is expected to interface to most, if not all, computing systems including computers, mobile phones and Internet servers. Software engineers are also concerned with developing algorithms that process data and make something useful of the processed information whether these algorithms run on your own embedded hardware or on a distant server.

Hardware platforms aside, software development can be divided into five main categories in genral:

We'll talk more about software development for hardware products in a future article. Up to this point, our hardware prototype is up-and-running and can be demoed to potential users to collect feedback and improve (or exit the market before you invest more time and efforts!) If you want to bring your product to the masses, though, there's still more work left until you can manufacture it and sell it through. We'll go through the remaining size steps in the third and last part of this series. 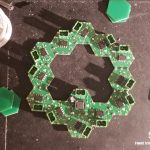 A Journey into Building Your Own Electronic Hardware – Part IArticles